Her resume pales when compared to most of her foes, but Warrawee Xenia’s current winning streak stands at seven, and her connections hope she can extend it to eight Saturday afternoon at The Meadowlands, when the daughter of Walner-Endless Flirt leaves from post three as the 5-1 third choice on the morning line in the $500,000 Hambletonian Oaks for 3-year-old trotting fillies. 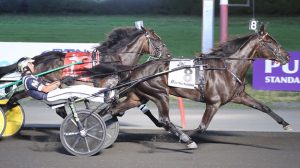 “I hope we can get away mid-pack,” said trainer Mark Steacy. “As long as we can stay close to them, I think our horse can go real fast in the stretch.”

Based on her performance in the second of two Oaks eliminations last week, that’s a big understatement.

Fashion Schooner, the New Jersey Sire Stakes and Del Miller winner, was sailing along on the lead as the 1-5 favorite when the field hit the head of the stretch. Warrawee Xenia, a 7-1 shot who was bothered around the far turn, was sixth at this point, more than five lengths behind the leader. She then veered wide for the stretch drive and nailed Fashion Schooner by a head in a lifetime-best 1:52.2 after sprinting her final quarter in :26.4 in an effort that left on-lookers shocked.

Bob McClure, who won the 2019 Hambletonian with Forbidden Trade, wasn’t all that moved.

“That actually wasn’t this filly at her best,” he said. “She struggled a little bit in the turns, and she usually does that when she’s got a little bit of a muscle issue. Mark is pretty good at fixing her up and usually the next week she’s dynamite. So, I think you’ll see an even better version [Saturday].”

Warrawee Xenia’s road to the Oaks has been anything but typical. After a 2-year-old campaign that saw her race five times and win only once, she began this season with a second-place finish at her home track of Woodbine Mohawk Park against non-winners of 2, before beating that kind of stock four times in a row. She then bumped up to non-winners of 3 and won two more before last Saturday.

“This horse, even last year, showed lots of talent,” said Steacy. “She just ran into a few problems. Coming back this year, those problems seemed to be gone. The speed was there, and we raced this horse right. She started in non-winners of 2 and got really confident. She was trotting home in 27 seconds every week up there [at Mohawk] and doing it with the earplugs in every time.

“She didn’t make any money last year, so it was tough to pay some of those early stakes payments. But, like I said, we thought we had a nice filly, and we are gearing up for the last half of the season.”

If Warrawee Xenia is to complete this Hambletonian Oaks fairy tale with a victory, she’ll have to earn it.

Venerable, who won the other elim in wire-to-wire fashion in 1:52.4, will depart from post five and is listed at 9-5 for trainer Nifty Norman and driver Dave Miller, while Fashion Schooner will start out at 4-1 from post 10 for Tim Tetrick and Jim Campbell.

“[Winning the Oaks] would be a nice feather in our cap,” he said. “We have a pretty talented filly. If she brings her ‘A’ game, we have a pretty good shot.”

The Hambletonian Oaks has a post time of 4:48 p.m. and will be shown live on Fox Sports 2. The big Hambletonian Day card at The Meadowlands kicks off at noon with the first of 16 races.