Venerable won with ease as the 4-5 favorite in the first elimination. The daughter of Walner sprinted off the gate as Bare My Soul briefly took the lead from the outside. Driver David Miller guided Venerable around the early leader to click the first quarter in :28, then keeping Venerable comfortable on top with all foes following to hit the half in :56.2.

From the back, Misswalner Fashion took to the outside but wound up second-over when Manon shifted to an overland journey. Venerable meanwhile recorded three-quarters in 1:24.3. Misswalner Fashion broke rounding to the bottom of the turn while Bare My Soul raced revved in a tight pocket to the inside of Selfie Queen and late-charging long shot Yanaba. Yet Venerable was not threatened at the finish, winning by three-quarters of a length in 1:52.4 over Yanaba and Bare My Soul. Selfie Queen and Manon also made the final. 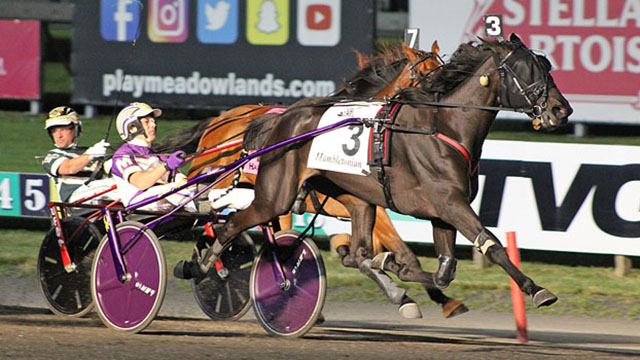 Millionaire Venerable stamped herself as one of the likely favorites in next week’s Hambletonian Oaks with a 1:52.4 elimination win.

Trained by Richard “Nifty” Norman for owners David McDuffee, Melvin Hartman, Paul Bordogna and Steve Arnold, Venerable paid $3.80 to win and hoisted her lifetime earnings to $1,116,548. It was the 12th win of her career.

Norman said Venerable has been going well through her sophomore season:

“Each start since she broke [in the New Jersey Sires Stakes final] has been a little better and you can see in her form she has been getting stronger all the time, and I think we’re in good shape.” He did have some concern, he said, “because she seemed a little sleepy there, but I saw her prick her ears about a hundred yards off the wire and I thought, ‘That’s okay, she knows what she’s doing.’”

In the second Hambletonian Oaks elim, Canadian shipper Warrawee Xenia — with Bob McClure in the bike — stormed furiously from near last to first in the stretch to beat overwhelming favorite Fashion Schooner in 1:52.2.

Mon Cheval was quickest leaving the gate, with Baptism and Raised By Lindy the immediate chasers. Just after the :27.1 first quarter, Fashion Schooner took to the outside and brushed to take the lead. Sitting mid-pack at the :56 half, Pink Coco Chanel shifted to the outside and trotted swiftly into a threatening position going after the leader and was hunting her by three-quarters in 1:24.2.

The complexion changed, though, as Warrawee Xenia launched a freewheeling charge in the stretch and easily surprised Fashion Schooner at the beam to win for the eighth time this season and record a lifetime best of 1:52.2 by a half length. Pink Coco Chanel finished third, with Mon Cheval and Baptism completing the finalists. 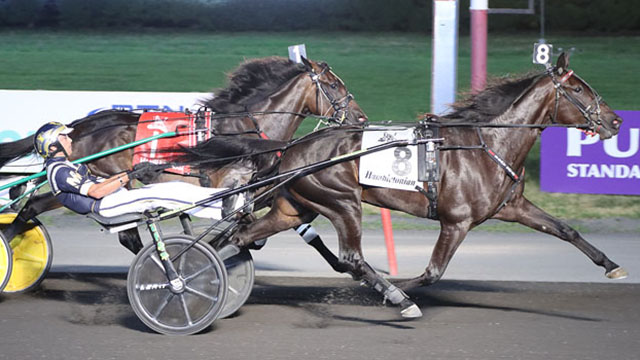 Warrawee Xenia surged from astern to nab Fashion Schooner in the nick of time in the other Hambletonian Oaks elimination. Lisa Photo.

“This horse, even last year, showed lots of talent,” trainer Mark Steacy said. “She just ran into a few problems. Coming back this year, the problems seemed to be gone [and] the speed was there. We raced this horse right — she started in non-winners of two, she got really confident. She was trotting home in :27 every week up there and doing it with earplugs in all the time.”

“That actually wasn’t this filly at her best,” McClure said after the race. “She struggled a little bit in the turns tonight; she usually does that when she has a little bit of a muscle issue. But Mark’s pretty good at fixing her up and usually the next week she’s dynamite. So I think you’ll see an even better version [of her] next week.”