Driver Tim Tetrick was firing on all cylinders Thursday night at The Meadowlands, guiding four winners on the nine-race program, including two of four New Jersey Sire Stakes divisions.

The 40-year-old pilot got things started in the second race with Wall Of Blue, a Jim King Jr. trainee who took the lead at the half and cruised down the road from there to a safe three-quarter-length tally over Make Sweet Magic in 1:53 in the first of four second leg $30,000 NJSS splits for 2-year-old fillies.

Wall Of Blue, a daughter of Lazarus N-Misssomebeach Blue, paid $2.60 as the 1-5 favorite in taking the second of two divisions for pacers.

“She’s nice,” said Tetrick. “She’s an overachiever and has come a long way since early in the year. She’s got enough power. She raced well last week but got a little lost on the outside [when a three-wide bid got her a third-place finish].”

Did you have reservations about racing on the lead, given the horse’s inexperience?  “Racing is different than it was even two years ago. If you want to win these days, you have to be up close.”

Tetrick then scored in the next race with the trotter Grand Fashion, a Jim Campbell student who scored in 1:55.1. She went parked past the quarter on the lead and never had an anxious moment, scoring by 2 lengths over Southwind Cherry. 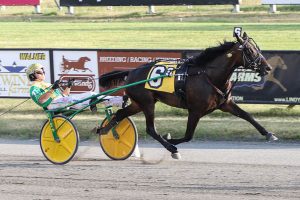 The daughter of Walner-Broadway Schooner returned $3.80 as the 4-5 public choice.

“Campbell is a great horseman,” said Tetrick. “Every year, he comes up with quality stock. This horse has a great pedigree. She’s got speed and is pretty nice.”

Fans of “The Bionic Man” then had to wait until the eighth race to get back in the win column, but the reward was worth the wait, as Tetrick steered Illini Duke to victory at odds of 4-1 in a TrackMaster 74 pace in 1:53.2.

His completed his four-bagger in the finale, as the Hall of Fame pilot guided 1-9 chalk – and back classmaster – Machdavid to victory lane in 1:51.1 in a low-end conditioned pace. The Tetrick late double returned $8.20.

Scott Zeron had himself a big night as well, scoring three times on the card.

In the first pacing event, he guided Ucandoit Blue Chip (Keystone Velocity-Molly Can Do It) to her second straight NJSS score in the first race for trainer Linda Toscano as the 4-5 betting choice in 1:52.

“The Money Man” then cashed in with Shaving Mug as the 5-2 second choice in a TrackMaster 70 pace in the fifth before capping his three-bagger in the next race with 3-5 favorite Cultured in an overnight for 2-year-old filly pacers in 1:53.1 to give Toscano a training double.

PHOTO: Grand Fashion takes a division of the New Jersey Sire Stakes for 2-year-old trotting fillies at The Meadowlands Thursday night, one of four winners on the card for driver Tim Tetrick. (Credit: Lisa Photo)