STANDING OUT IN TOUGH CROWD AT BIG M

Given how high-quality the driver colony is at The Meadowlands, now that the racing calendar has just passed the quarter point of the season, a picture is emerging of how some drivers are standing out in an extremely talented crowd.

Saturday (April 9) marked the 25th of a 90-program season, and while his streak of winning at least once on every card ended at 22 on the Saturday prior, no pilot has been as consistent as Yannick Gingras during 2022.

The 42-year-old, Hall of Fame-bound Quebec native has won at least once on 24 of 25 cards this year, and his total of 60 wins puts him comfortably in front of the driver-colony pack. Gingras is also tops in UDRS (Universal Driver Rating System) at .347 and is second in both win percentage (22) and in-the-money percentage (49).

Since top drivers drive top horses for top outfits, they attract the most attention at the betting windows and almost never show a flat-bet profit. In addition to what he’s done (see above) after having missed the first two months of the year vacationing, Dunn currently has a statistic that is almost impossible to attain for an entire year, as his drives currently return a positive ROI (Return On Investment). Heading into Friday’s (April 15) races, the three-time defending United States Harness Writers Association Driver of the Year is at an impressive plus-15 percent.

Getting back to McCarthy – who guided five winners last weekend – he’s been entrusted by trainer Linda Toscano with a superstar who debuted at The Big M last Saturday.

The 6-year-old New Zealand-bred mare Amazing Dream N arrived at the mile oval from Australia – where she had been racing – and crushed her foes in a fillies and mares Open for pacers. 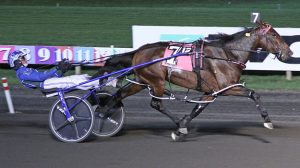 She is expected to dance in the major aged pacing mare stakes dances during the season.

COUNTDOWN TO THE WHHC: With The Meadowlands being the top Standardbred venue in the sport, it’s a natural that the World Harness Handicapping Championship Final would be held at The Big M (it takes place on Sept. 10), and those who’d like to earn a spot in the big event can do so when there is another WHHC Qualifier at the mile oval on Saturday, April 30.

DERBY DRAWS NEARER: The 148th renewal of the world’s most famous horse race, The Kentucky Derby, takes places on Saturday, May 7, and race fans know that one of the best places to watch and wager on the event is inside The Meadowlands at one of the country’s top simulcast venues.

Last week (Saturday, April 9) saw the final three major Derby preps, so those horses are now clearly in the conversation for who could win the “Run for the Roses”.

The Wood Memorial at Aqueduct was taken by the Todd Pletcher-trained Mo Donegal. The $250,000 purchase upped his lifetime bankroll to just over $621,000 in winning for the third time in five lifetime starts.

Zandon, a Chad Brown student, took the Blue Grass Stakes at Keeneland, and in the process upped his bank account to $713,000 with a record of two wins from four starts.

At Santa Anita Park, Taiba, a Tim Yakteen trainee, won the Santa Anita Derby. The $1.7-million auction purchase has Mike Smith as his jockey, who will be aboard his 27th Derby mount on the first Saturday in May while searching for this third win.

ACTION GALORE IN “THE BOOK”: Things are always buzzing inside The Big M grandstand, and that buzzing is likely to reach the level of a dull roar this weekend with all of the possibilities players can partake in.

Basketball fans can get their fill by betting on the NBA Play-In Tournament on Thursday (April 14) and Friday (April 15) before the playoffs start on Saturday (April 16).

The Brooklyn Nets earned the No. 7 seed in the Eastern Conference after their Play-In victory over the Cleveland Cavaliers on Tuesday (April 12) and will take on the Boston Celtics, who are the second seed, in the conference quarterfinals that begin on Saturday.

If you like either team to win the NBA Championship, the Celtics are +700 while the Nets are +850. The top two favorites to win the title are the Phoenix Suns (+270) and the defending champion Milwaukee Bucks (+500).

If baseball is your thing, you can get the New York Yankees to beat their AL East-rival Toronto Blue Jays in a Thursday night game that gets underway at 7:06 p.m. The Yankees are the -132 favorite while the Jays are +112.

The Mets, winners of five of their first seven games after opening their season on the road, will face the Arizona Diamondbacks in the first game this season at Citi Field on Friday at 1 p.m. For the most up-to-date lines and prop bets, go to https://sportsbook.fanduel.com/navigation/mlb

PARTY AT THE BIG M: With the warmer weather just around the corner, come on out to The Meadowlands for a night out with one friend, or 101. There are many different options the track offers for wagering, fine dining, or even having a big family or business event.

For more information and to make reservations, call 201-THE-BIGM or go to playmeadowlands.com.