Home / MRE News / SATURDAY WAS SENSATIONAL AT THE BIG M

SATURDAY WAS SENSATIONAL AT THE BIG M

Harness aficionados know that many of the game’s biggest nights take place at The Meadowlands.

Without question, last Saturday (May 21) was one of those memorable evenings. And world-class harness racing wasn’t the only thing fans enjoyed.

The feature was the $170,450 Arthur J. Cutler Memorial for free-for-all trotters, named for the famed restaurateur and harness racing enthusiast who passed away in 1997 at the age of 53.

“I just can’t believe it’s been 25 years since we lost Artie,” said Meadowlands Chairman and Chief Executive Officer Jeff Gural. “I really miss him. For people who didn’t know him, he was a great guy. He loved the races, loved The Meadowlands. It was a big loss, but we’ve been able to honor his memory all these years.”

There’s little doubt Cutler would’ve loved what went down in the race named for him.

The Ake Svanstedt-trained and driven Ecurie D DK was simply amazing in his seasonal debut, putting up the fastest mile in history for an older trotting stallion on a mile track after hitting the finish line in 1:49.1. The time also equaled the fastest trotting mile in the history of The Big M, which was set by Atlanta in 2020. 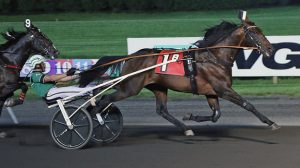 Was the Cutler the main event? Of course. Was there plenty more to keep an overflow on-track crowd entertained on a sweltering, summer-feel Saturday? Surely.

During the live harness card, racing fans were treated to the 147th edition of The Preakness Stakes, simulcast from Baltimore’s Pimlico Racecourse, and those who bet on the Chad Brown-trained, Jose Ortiz-ridden Early Outing collected $13.40 to win for the 5-1 second choice in the betting. Epicenter, second in the Kentucky Derby, finished second again in the second jewel of the Thoroughbred Triple Crown. Epicenter was favored in both races.

As the racing toggled between the Thoroughbreds and the Standardbreds, local fans were cheering loudly – and cashing tickets – on the New York Yankees and New York Mets after making their wagers in the top sports betting facility of its type in the world, the FanDuel Sportsbook, which is located inside the grandstand at The Big M.

The Yankees, far in front of the field in the American League East standings, took down the Chicago White Sox 7-5 as DJ LeMahieu hit a grand slam home run. The National League East-leading Mets beat the Rockies in the first game of a doubleheader 5-1 as Starling Marte hit a two-run homer and Carlos Carrasco recorded his fourth win of the year before the Rockies took the nightcap by a score of 11-3.

Good thing the track’s annual “Beer Fest” took place that night, with over 60 local breweries on hand to please the palate of beer lovers.

“After a rainy Friday,” said Big M Chief Operating Officer and General Manager Jason Settlemoir. “The beer crowd was treated to one of the most beautiful nights of the year on what was nothing short of a fantastic night to be at The Meadowlands enjoying all we have to offer.”

Primary Colors started the speed show in the first race, stopping the clock in 1:48, one-fifth of a second faster than Workin Ona Mystery and Red Right Hand, who established their seasonal bests at The Big M, and Jimmy Freight, who paced his mile at Woodbine Mohawk Park.

In the very next race, Bettors Donttell hit the finish in 1:47.3, one of four winners on the night for the terrific team of driver Yannick Gingras and trainer Ron Burke.

But there was one more amazing mile to come.

It marked the 11th time this year that betting busted the $3-million barrier at The Big M. The only time wagering was higher than Saturday’s program was on March 5, when the all-source handle totaled $3,755,422.

Betting for the weekend was just over $6.1 million.

GSY? BIG BETTING! The GSY (Gural Settlemoir Yarock) Amateur Driving Club races have been a hit with bettors all meeting long. The combination of full fields and enormous wagering value make them popular with players.

The four-race total of $935,798 was significantly higher than the handle of the entire program of any harness track in the country.

In what was just another non-chalky night at the salt mine for the GSY, zero favorites won Friday, with the average win price on the four dashes a healthy $17.80.

‘LINEDRIVE’ HITS: Sunday (May 22) night’s featured simulcast race saw many of the top 4-year-old pacers in North America go at it at Flamboro Downs in the $273,500 Charles Juravinski Memorial, and when they hit the wire, it was Linedrive Hanover scoring as the 2-1 second choice in the betting in 1:49, the fastest mile in the history of the track located in Dundas, Ontario, Canada.

FRIDAY AT THE ‘FAIR’: Western Fair Raceway in London, Ontario, Canada will host some of the best older pacers in the game Friday (May 27) night when the track plays host to the $150,000 Camluck Classic.

Post time for the race is 11:16 p.m., which is immediately after the Big M finale, and this is the field from the inside out: Poseidon Seelster, Twin B Tuffenuff, Tattoo Artist, Funatthebeach N, Jimmy Freight, Ocean Rock, American History and This Is The Plan.

HORSE PLAY: Patrons attending the races at The Meadowlands can participate in “Horseplay” for a chance to win a 2022 Toyota Corolla.

The contest takes place every live racing night through Friday, August 5. Participants will attempt to throw a numbered horse into the window of a moving car. Of those that land inside the vehicle, one winner will be chosen at random and will receive a $100 betting voucher.

Each night’s winner will be entered into the grand prize drawing, which will take place on August 5. Guests can pick up a free horse to toss at the Players Club Desk or the Horseplay table in front of the winner’s circle.

There is a bonus for the kids who are at the track. The youngsters who help pick up the horses left on the track will receive a free ice cream.

SCORE SOME SWAG: If you love racing and sports memorabilia, The Meadowlands is the place to be on Saturday (May 28) when the track presents “Summer & Sports Swag Sweepstakes” Night.

Here is a partial list of items those who enter the drawings have a chance to win: Fire pits, seltzer coolers and pizza ovens, as well as jerseys from sports figures such as David Ortiz, Pete Alonso, Chris Kreider and Derek Jeter.

For complete information, go to https://playmeadowlands.com/event/summer-sports-swag-sweepstakes/

FREE WHHC “Q”: With The Meadowlands being the top Standardbred venue in the sport, it’s a natural that the World Harness Handicapping Championship Final would be held at The Big M (it takes place on Sept. 10), and those who’d like to earn a spot in the big event can do so when there is another WHHC Qualifier at the mile oval on Saturday, June 4.

The difference from most of the other prior qualifiers is that this contest is free to enter.

For complete information, go to https://playmeadowlands.com/event/free-whhc-qualifier/

The Derby is open to the first 80 entrants by June 4.

For complete information, go to https://playmeadowlands.com/event/4th-annual-weiner-dog-derby/

BELMONT COUNTDOWN: The 154th running of The Belmont Stakes takes place on Saturday, June 11. The “Test of the Champion”, a mile-and-a-half-long marathon for 3-year-olds, is one lap around the track known as “Big Sandy” in Elmont, New York.

There’s no need to sit in traffic on the Cross Island Parkway on the way to Belmont Park. Just head to The Meadowlands, where The Big M’s expansive simulcast area is the place to be to get your action on the third jewel in Thoroughbred racing’s Triple Crown.

Friday night, check out the pregame show when Big M TV’s Dave Little will interview Marcus Melander on “In the Sulky”.

For up-to-date lines on any sports event go to https://www.fanduel.com/sportsbook-meadowlands