Bad weather wreaked havoc over much of the East Coast last weekend (May 6-7), with rain canceling the New York Yankees and Mets games on both Friday and Saturday, and Monmouth Park having to call off its Opening Day card of racing on Saturday.

Despite the soggy state of affairs, a large crowd converged on one of the finest entertainment destinations in the Metropolitan area, The Meadowlands, which never missed a beat despite the heavy rains, to experience a day on Kentucky Derby Saturday that horseplayers thoroughly enjoyed.

“We have to hand it to our track crew and our drivers,” said track Chief Operating Officer and General Manager Jason Settlemoir. “The track crew worked hard through the inclement weather to maintain a safe racing surface while the drivers really came through for The Meadowlands and the purse account. They gave the wagering public professional seven-minute post parades despite the heavy rain, and that helped drive the handle past the $3-million mark on both nights.”

REED GETS RICH BY STRIKING IN DERBY: The story of The Kentucky Derby was much more than a longshot winning from post 20 who wasn’t even in the race until a scratch Friday morning.

Sure, Rich Strike won with a furious rally after going off at 80-1, but the story of Eric Reed, a trainer who lost 23 horses in a barn fire caused by lightning, who six years later saw lightning strike a second time, only this time, it was a good thing, as his horse gunned down two of the race favorites (Epicenter and Zandon) with a jockey, Sonny Leon, whose name is anything but household, in deep stretch to win the 148th edition of the “Run for the Roses.”

Now, that was a story.

For those who like the numbers as they relate to the payouts, they are big, to say the least.

NINE IS FINE: Saturday marked another night of big action at The Big M, as a total of $3,359,528 was put in play, marking the ninth time this year that betting busted the magic $3-million barrier.

Also, for the second time in 2022, betting blew past the $3-million plateau on both nights of the race week.

On April 1-2, a total of $6.3 million was pushed through the windows, while last weekend saw a total of $6.4 million in all-source wagering.

BIG M LIVE: This Saturday on Fox Sports 2, the second of six live broadcasts that will combine the talented New York Racing Association’s TV department with The Big M’s will be broadcast live to a national television audience. The 2½-hour presentation begins at 9 p.m. and will feature Thoroughbred racing from Churchill Downs paired up with the harness action at The Meadowlands.

The third show will be seen on June 18 (9-11:30 p.m.) and will feature the same Churchill Downs/Meadowlands pairing.

LAST WEEK: Saturday (May 7) night saw the Graduate Series for 4-year-olds get underway, and trainer Tony Alagna, who won the first six qualifiers last Friday (May 6) morning, took both Graduates for pacers, scoring with Carbine (driven by Todd McCarthy), who upset 1-5 shot Charlie May, and Abuckabett Hanover, who went an ideal second-over trip to complete the trainer sweep. 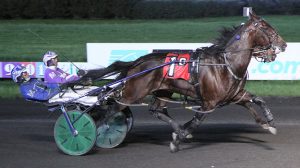 THIS WEEK: Seven divisions of the New Jersey Sire Stakes for 3-year-olds of each sex and gait highlight this Friday’s (May 13) 13-race program, while on Saturday, the second leg of the Graduate will be contested.

CHARITY ‘CAPPING CONTEST: On Saturday (May 14) night, The Meadowlands will be hosting its second annual Charity Handicapping Contest.

The event offers $15,000 in prize/donation money and is a free competition open to 501 C3 organizations.

For complete information, go to https://playmeadowlands.com/event/2022-charity-handicapping-contest/

HAVE A BEER: On Saturday (May 21), The Meadowlands will host its annual Beer Festival. 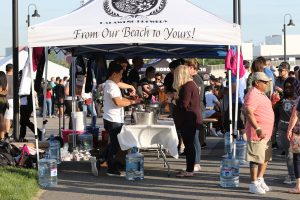 For a list of confirmed breweries that will be on hand, and they are numerous, as well as how to buy tickets, go to https://playmeadowlands.com/event/2022-meadowlands-racetrack-beer-fest/

THE CROWN’S SECOND JEWEL: Come on out to The Meadowlands on Saturday (May 21) for the second leg of Thoroughbred racing’s Triple Crown, The Preakness, which takes place at Baltimore’s Pimlico Racecourse.

Watch and wager on the event in the comfort of the huge simulcast area at The Big M and see if Rich Strike can take home the trophy for the second jewel in The Crown.

HORSE PLAY: Patrons attending the races at The Meadowlands can participate in “Horseplay” for a chance to win a 2022 Toyota Corolla.

The contest takes place every live racing night through Friday, August 5. Participants will attempt to throw a numbered horse into the window of a moving car. Of those that land inside the vehicle, one winner will be chosen at random and will receive a $100 betting voucher.

Each night’s winner will be entered into the grand prize drawing, which will take place on August 5. Guests can pick up a free horse to toss at the Players Club Desk or the Horseplay table in front of the winner’s circle.

There is a bonus for the kids who are at the track. The youngsters who help pick up the horses left on the track will receive a free ice cream. 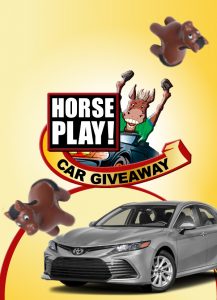 SURVIVE THE SUMMER: The Meadowlands’ Summer Meet Survival Challenge, sponsored by 123Racing, continues this weekend with some great things on the table for bettors.

BET BASEBALL IN THE “BOOK:” Local baseball fans are hoping for a Subway Series this year, as the New York Mets and Yankees currently sit atop their respective divisions.

Where can you get all your sports betting action? Inside The Meadowlands, at the FanDuel Sportsbook, the top facility of its kind in the world.

The Mets are in Washington taking on the Nationals Thursday (May 12) afternoon, so getting action on that game – unless it’s an “in-game” wager – will be tough, but there will be a full slate of wagers available at night when the Yankees take on the White Sox in the Windy City in an 8 p.m. start.

The NBA and NHL playoffs continue in full force on Thursday.

For NHL fans, there are four games on the schedule, the first of which sees the puck drop at 7 p.m.

For up-to-date lines on those events – and many, many others – go to https://www.fanduel.com/sportsbook-meadowlands