A pair of fillies dropped into the box of the Hambletonian eliminations to try and become the third to beat the boys in the last five years and the 16th in the history of the event. Focus centered on Marcus Melander pupil Joviality S in the second $100,000 elimination on Saturday (July 30) at The Meadowlands until Jiggy Jog S stole the spotlight in the final yards.

Driver Dexter Dunn hustled Jiggy Jog S towards the lead and yielded for a pocket ride to King Of The North to a :27.4 first quarter. Joviality S, pushing from post 10 as the 4-5 favorite, then swooped to the lead before a :55.2 half. Her stablemate Temporal Hanover took first-over to the final turn, pressured the leader to three-quarters in 1:25.2, and appeared as the main threat to Joviality S swinging for home.

Temporal Hanover dug into Joviality S through the lane as the filly held her ground and attempted to counter the challenge. Though suddenly, with second-over Testing Testing faltering, a lane opened for Dunn to fire Jiggy Jog S off the pegs and around the Melander-trained duo to jet home and land a head in front at the end of a 1:52.2 mile. Temporal Hanover took second from Joviality S, while King Of The North and Keg Stand completed the top five. 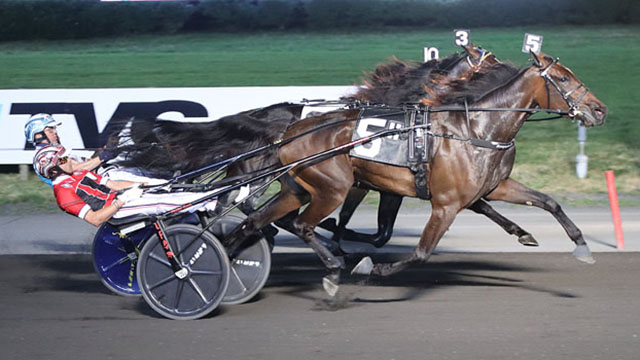 Jiggy Jog S won at sixes in her Hambletonian elimination, emerging from traffic and reaching by a scant head.

“We did get lucky [to get out],” Dunn said after the race. “She’s such a handy filly. She was great off the gate and sat in a hole beautifully. The pace really was slow coming off the last turn and she was loaded in trot, but we had a lot of horses around us. We got a gap and she really exploded with a fast sprint there to the finish. I knew she’s got speed [but] this definitely was the best she’s felt tonight. There were a ton of really good horses she was [going] past at the end, but she’s a lovely filly.”

Jiggy Jog S recorded her sixth win from 17 starts while pushing her bankroll to $460,556 for owner Jorgen Sparredal Inc. The Åke Svanstedt-trained daughter of Walner secured a protected draw from posts one through five for the $1-million Hambletonian and will have a chance, along with finalist Joviality S, to join the recent ranks of Atlanta in 2018 and Ramona Hill in 2020 on the plaque of America’s trotting classic.

Driver Tim Tetrick patiently rolled the Lucas Wallin pupil Rebuff to the front and coasted to a 1:52.2 victory as the decisive favorite to win the first $100,000 Hambletonian elimination.

A four-wide prong pushed first the front into the first turn, with Looks Like Moni landing on top to a :27.4 first quarter before pocket-sitting Fast As The Wind circled to the lead into the backside. Rebuff floated onto the rim and advanced steadily to overtake Fast As The Wind after a :56.2 half.

Periculum, part of the first-turn skirmish, pulled first-over heading to the far turn and kept in contact with Rebuff to three-quarters in 1:24.2. But Rebuff stayed on the muscle straightening for home, cruising to a 1-1/4-length win over Fast As The Wind as he gave flattening pursuit from second. 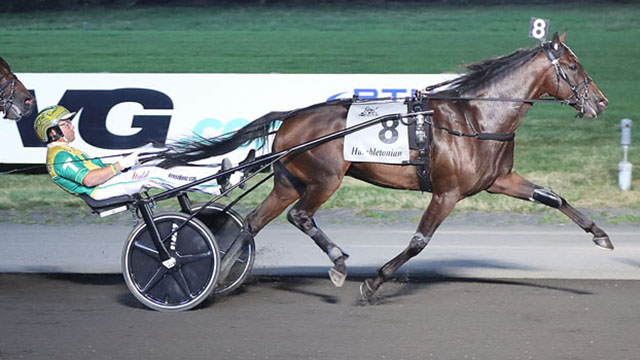 “We raced plenty of times as a 2-year-old and he’s a nice sized horse and good gaited, so we figured he probably didn’t need so many starts to get him in shape,” trainer Lucas Wallin said of Rebuff’s light sophomore schedule. “And so far, the plan has been working pretty perfect.”

The remainder of the field finished tightly bunched, with Cool Papa Bell, Periculum and Looks Like Moni securing the remaining five spots, respectively, to advance to the final.

Rebuff, also earning a protected post draw with the win, remains unbeaten from three starts this season while adding a seventh win to his 14-race resume. He has banked $573,670 for owners Kjell Magne Andersen, Lucas Wallin and Pieter Delis, and returned $2.40 to win.

‘GEERS’ TO THE MAXES: After finishing second in The Meadowlands Pace in his last start, Mad Max Hanover was sent to the gate as the 1-2 favorite and delivered with a sensational 1:47.4 lifetime best effort in the $61,800 Geers Stakes for pacing 3-year-old colts and geldings. Tim Tetrick drove for trainer Jake Leamon. … Mistletoe Shalee champion Max Contract upped her winning streak to three after taking the $52,400 Geers split for 3-year-old pacing fillies. The 6-5 public choice was driven by Andy Miller and trained by Andy’s wife, Julie. The winning time was 1:49.1.

ATLANTA PROVES ‘VERSATILE’: Atlanta worked out a perfect pocket trip on the way to a 1:50 score in the $40,000 fourth leg of the Miss Versatility for open trotting mares. The lifetime earner of over $3.2 million won for the 34th time from 70 lifetime starts with Yannick Gingras driving for trainer Ron Burke. As the 3-1 second choice, she returned $8.00 to win. Bella Bellini failed in her quest for a fifth straight win, finishing third as the 1-2 public choice.

There have been 59 race cards contested this year at The Big M, and on 17 occasions betting has gone past the $3-million plateau.

For those who will be in attendance, the event begins at 2 p.m. The post draws will start at 3 p.m. and will be shown live on both the Meadowlands’ Facebook Live page as well as The Big M’s YouTube Channel.

Big M TV’s Dave Brower, Jessica Otten and Gary DiLeo will be there with commentary and interviews.

A LITTLE MORE: Andy Miller led the driver colony with three winners on the program. … Ron Burke had a training double to finish the weekend with five winner’s circle visitors. … Next week is the final week of racing at the Championship Meet, and there will be an additional day of live action. Racing will take place Thursday and Friday with a first-race post time of 6:20 p.m. before the grand finale, Hambletonian Day, Saturday (Aug. 6), when the first race will head to the gate at noon.

To watch replays of the Hambletonian eliminations, click the following links: Elimination 1 | Elimination 2.