If that is indeed the case, then the racetrack regular’s best friend is the GSY (Gural Settlemoir Yarock) Series, which is featured on Friday nights at The Meadowlands. The GSY is an amateur driving club which always provides full fields and ultra-competitive racing.

The GSY, much to the delight of the racetrack regular, hasn’t seen a race where the favorite has won since March 11, when Always A Force and the GSY’s leading driver, Tony Verruso, scored as the post-time choice and paid a very non-chalky $9.00 to win.

Since then, it’s been an almost inconceivable 25 consecutive races without a single favorite visiting the winner’s circle.

“The GSY races remind me of the races at The Big M in the 1970s and 80s,” said track Chief Operating Officer and General Manager Jason Settlemoir. “Full fields, constant pressure on the horses going to the lead, which leads to exciting finishes making it possible for horses to close from far off the pace. That type of racing typically leads to larger than average payoffs, which leads to larger than average pools. In fact, last Friday (April 22), the average GSY pool was well over $200,000.”

Getting back to the racetrack regular, the average GSY payoffs are sure to make him or her smile.

Over the last 26 GSY races since March 11, not one horse has gone off at odds of less than even-money. Fifteen of the 26 races have seen the post-time choice go off at 2-1 or more with 5-2 or more being the price on the chalk on eight occasions.

“The GSY races are more unpredictable, which make the wagering on them appealing to an increasing number of horseplayers,” said Settlemoir. “Last Friday, the first GSY event handled $266,757. That’s an eye-popping number for any race.”

The GSY will have four races at The Meadowlands – for a sixth consecutive week – when racing resumes Friday (April 29) at 6:20 p.m.

THE BIG M GOES NATIONWIDE: For a second consecutive year, the biggest stakes events on the Meadowlands calendar will be made available to a national television audience as the New York Racing Association’s TV department will team up with The Big M’s for six live telecasts on Fox Sports 2.

The first show will feature Thoroughbred racing from Churchill Downs as well as harness action from The Meadowlands, and is set to air on Saturday (April 30) from 7-11 p.m. 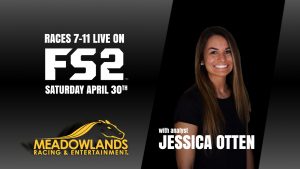 “The Meadowlands is proud to shine a bright Standardbred racing spotlight on the FS2 national telecast Saturday night,” said Settlemoir. “It’s an honor to be part of the Opening Night festivities at Churchill Downs, which begins the countdown to the greatest two minutes in sports, The (May 7) Kentucky Derby.”

WHHC ON SATURDAY: With The Meadowlands being the top Standardbred venue in the sport, it’s a natural that the World Harness Handicapping Championship Final would be held at The Big M (it takes place on Sept. 10), and those who’d like to earn a spot in the big event can do so when there is another WHHC Qualifier at the mile oval on Saturday (April 30).

SURVIVE THE SUMMER: On Friday, May 6, The Meadowlands’ Summer Meet Survival Challenge, sponsored by 123Racing, begins with some great things on the table for bettors.

DERBY DAY COUNTDOWN: One of the biggest days of the year on the horse racing – and all of sports – calendar is the first Saturday in May, when the Kentucky Derby takes place at Churchill Downs.

Meadowlands’ regulars know that watching and wagering on the “Run for the Roses” in The Big M’s expansive simulcast area is the way to go.

There are numerous dining options for Derby Day at The Big M. For complete information, go to https://playmeadowlands.com/event/2022-kentucky-derby-simulcast-day/

NBA ACTION IN “THE BOOK”: The FanDuel Sportsbook is the top facility of its type in the world, but Meadowlands fans already knew that, because “The Book” is located inside the grandstand at The Big M.

The NBA playoffs roll on Thursday (April 28) with a super tripleheader.

In the first game (7 p.m.), the visiting Philadelphia 76ers are a 1½-point favorite over the Toronto Raptors. The Sixers are -122 on the money line and the under/over is 210½.

Game two tips just 30 minutes later, where the Phoenix Suns (-2) travel to New Orleans to take on the Pelicans. The Suns are -134 on the money line and the under/over is 214½.