GINGRAS AND FORD OFF TO QUICK 2022 STARTS AT BIG M

Two horsemen stood out in front of the rest during the first weekend of racing at The Meadowlands in 2022 as driver Yannick Gingras recorded eight winners over the course of Jan. 7-8 while trainer Mark Ford schooled four to victory lane.

Gingras, who will be inducted into harness racing’s Hall of Fame in July, was the bettors’ best friend, winning at a 32 percent clip. His three seconds and five thirds gave him a total of 16 on-the-board finishes from 25 starts, meaning that the 42-year-old Quebec native “hit the ticket” 64 percent of the time.

His Return On Investment (ROI) was plus 18 percent.

Heading into Friday’s card, Gingras thought he might have some success. He was right, hitting victory lane five times. 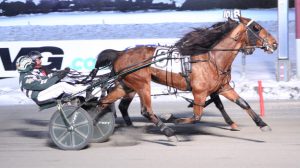 “I had some power and they were ready to race,” said Gingras.

And what’s ahead for this season?

Ford’s four scores came from just five starts, and his lone non-winner came in third, so his win (80) and in-the-money (100) percentages were both remarkable.

“Every little bit helps. It’s not the first time that’s happened, you know,” joked Ford, with his tongue firmly in cheek.

On a more serious note, the President of the Standardbred Breeders & Owners Association of New Jersey for the last seven years is pleased with the current harness racing environment in the Garden State.

“There have been a lot of ups and downs over the last four or five years,” said Ford. “We have finally righted the ship and it seems like better times are ahead. Getting a piece of the sports wagering and the appropriation from the state have us going well now.

“[Meadowlands Chairman and Chief Executive Officer] Jeff Gural, some people like him, some don’t, but the proof is in the pudding. He has gone after the drug problem and bettors have a good feeling that they are getting a better shake when they go to The Meadowlands.”

THE SKED: Racing at The Big M is conducted on a Friday-Saturday basis and has a first-race post time of 6:20 p.m.

The track’s live “Racing from The Meadowlands” pre-game show kicks off nightly at 5:37 p.m.

CLIMB IN THE SULKY: There will be some special guests on the track’s “In the Sulky” pre-game show segment this weekend. Jim King Solomon, who played a key role in putting together this weekend’s Dr. Martin Luther King Remembrance events will be interviewed by Dave Little on Friday while Dave Brower will be joined by Northwood Bloodstock’s Bob Boni on Saturday. Brower and Boni will be talking about Monday’s Winter Mixed Sale at The Big M.

BIG POOLS, SMALL TAKEOUTS: The Meadowlands is the industry’s handle leader, and much of the reason why is many of the bets the mile oval offers feature a low takeout of 15 percent.

Here is a rundown of those wagers for the upcoming weekend:

A NEW LOOK: The Meadowlands website has had a makeover, and those seeking the 411 on everything Big M can now do so at a site with a clean, modern design that is mobile phone responsive.

As it has always been, the address is playmeadowlands.com and is worth checking out.

GET SOCIAL: Everything Meadowlands is available by going on Twitter. You can check in with the Big M team for early changes, racing information and staff selections by going to @themeadowlands or #playbigm.

WHAT’S COMING UP? On Saturday, Jan. 22, The Big M will host a World Harness Handicapping Championship Qualifier where the prize money – based on 50 entrants – is $10,000. In addition, the top four finishers get a seat in the WHHC Final, which takes place at the mile oval on Saturday, Sept. 10.

For complete details, go to https://playmeadowlands.com/event/2022-january-400-whhc-qualifier/

One of the more popular promotions at the track is the “Chili Cook-Off”, which takes place on Saturday, Jan. 29. Patrons can walk around and taste samples, or, if you have a chili recipe, come on out and participate. You might walk away with the $1,000 grand prize.

For more information, go to https://playmeadowlands.com/event/2022-meadowlands-winter-chili-cook-off/

NFL fans can come to The Meadowlands on the day of the league’s championship game (Sunday, Feb. 13) and watch and wager on the biggest event of the year in American sports by viewing the game on huge-screen TVs that will be spread throughout the building and wagering on it in the FanDuel Sportsbook.

There will also be several dining options so fans can have a place to watch the game and have some great eats at the same time.

For all the details, and to make a reservation, go to https://playmeadowlands.com/event/big-game-dining/

SPEAKING OF FOOTBALL BETTING: Wild-Card Weekend kicks off this weekend on Saturday, Jan. 14, and you can watch and wager on the action inside the grandstand at The Meadowlands in the FanDuel Sportsbook.

The action gets underway Saturday at 4:30 p.m. when the Las Vegas Raiders visit the Cincinnati Bengals, who are a 4½-point point-spread favorite that are -225 on the money line. The under/over is 48½.

The action will then resume Sunday (Jan. 15) when the Philadelphia Eagles head to Tampa Bay to take on the defending champion Buccaneers at 1 p.m. The Bucs are -8½ and -370 and the U/O is 46.

The night game (8:15 p.m.) finds the biggest favorite of the weekend as the Kansas City Chiefs host the Pittsburgh Steelers. The Chiefs are a 12½-point favorite and a -700 money-line choice. The U/O is 46.