Favorites Fashion Schooner and Joviality S proved much too tough in their respective $100,000 divisions of Saturday’s (July 16) Del Miller Memorial, for 3-year-old trotting fillies, at the Meadowlands.

In the first division, Fashion Schooner and driver Tim Tetrick were much the best, winning in 1:50.1 over five rivals. Off the gate, Manon went directly to the lead from post six with Raised By Lindy leaving from the rail for second. Fashion Schooner, who landed in third early, let the first two settle before going to the outside to take command beyond a :26.2 first quarter. Those three controlled the top positions through a :54 half before Delilah Hanover charged first-over to make a bid at Fashion Schooner nearing three-quarters in 1:22.4. Manon trotted strongly in the final strides to challenge from the pocket, but Fashion Schooner crossed the finish line in 1:50.1, three-quarters of a length in front. Manon was second; Delilah Hanover stayed on for third.

The daughter of Walner won for the fourth time in her career, raising her earnings to $208,462 for trainer Jim Campbell and owner Fashion Farms LLC. 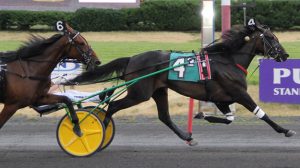 Campbell said, “I was very happy the way she dug in because [Manon] was a really good filly sitting on her back. She dug in, gave us everything she’s got, and so far this year she’s done everything and more than we could ask of her.” Campbell praised the filly’s breeding, saying it has “been pretty good to me. Broadway Donna is out of that mare, and Broadway Schooner gave us a real special day in the Hambletonian Oaks.”

In the other division, Yonkers Trot winner Joviality S easily controlled her six foes and held off a late bid from Venerable to win in a lifetime best 1:50.2.

Brian Sears guided Joviality S from post seven directly to the top with ease as Venerable, Selfie Queen and the others lined up behind her. In no rush, Sears marked a first quarter in :26.4, the half in :56 and asked Joviality S to accelerate to three-quarters in 1:24.1 as the fillies neared the stretch. Venerable revved up from the pocket for the only challenge, edging towards Joviality S in deep stretch, only for Joviality S to hold her ground and win by a diminishing half length. Venerable finished second with Selfie Queen picking up third.

“Venerable is a very fast filly, so you never know, and my filly has a closed bridle so she doesn’t see the other horses. But we were thrilled with her coming home in :26.1.”

“We were going to race her here because we didn’t know how she was going to be today,” Melander said. “First, we have to talk to the owner and Brian [Sears] and everyone. We’ll see.”