In a race that shaped up as a potential clash between last year’s Breeders Crown 2-year-old champions Rebuff and Joviality S, the last word went to 52-1 outsider Cool Papa Bell, who emerged from mid-division to nab Joviality S in the final yards of a 1:51.3 mile in the 97th Hambletonian, held Saturday (Aug. 6) at the Meadowlands. 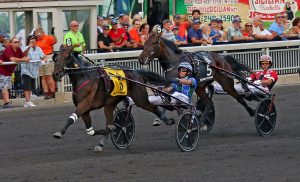 After Joviality S protected the lead into a :28 first quarter and subsequently yielded to 3-5 favorite Rebuff, who brushed from third with nine-sixteenths to go, Todd McCarthy methodically worked closer with Cool Papa Bell through the final turn. Meanwhile, Rebuff faced steady pressure from Temporal Hanover nearing the top of the stretch before facing an inside challenge from Joviality S — setting up for the much-awaited battle of the sexes. Joviality S succeeded in collaring Rebuff with a sixteenth to go, but Cool Papa Bell cascaded down the center of the track to complete the 52-1 upset — and to give trainer Jim Campbell a sweep of the Hambletonian Oaks and Hambletonian. Joviality S was a valiant second; Temporal Hanover finished third.