Jim King Solomon had himself a big night at The Meadowlands Friday, taking the Martin Luther King Remembrance Race on an evening when the civil rights icon was honored with a pair of dashes.

Solomon, who is known as ‘Cool’, began his night by appearing on The Big M’s “In the Sulky” interview segment during the pre-game show. The veteran caretaker, who was instrumental in putting the event together, then went out and did his fans right by finishing with a win and a second in his two drives during the card.

Solomon guided Opus Blue Chip to a wire-to-wire score as the 7-2 fourth choice in the wagering in the fourth race as the Andrew Adamczyk trainee won for a second straight start. The race paid tribute to Dr. King as the field featured all African-American drivers. 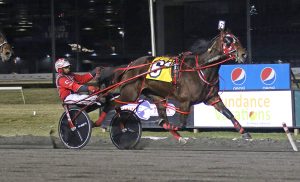 “He felt great,” said Solomon of Opus Blue Chip, who’s won 27 of 103 career starts. “Behind the gate he was good. I left out of there and just rated him. After the half, I took off. It felt great to win because this is a big race for me.” 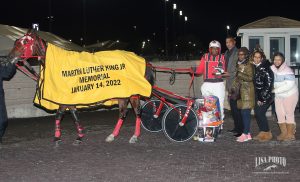 Driver Devon Tharps, who won last year’s sole MLK race with Acting Out, was coming at the winner in deep stretch but came up a neck short.

“This is my childhood dream to race here,” said Tharps. “I’m a third-generation horseman. Last year, I was in Kentucky when I recorded my first driving triple. Now, I’d like to get my foot in the door in New Jersey.”

Driving in a race named for Dr. King was big to the 28-year-old reinsman. “This race means a lot. Dr. King did a lot for our country.”

One of the things that Dr. King always stressed was inclusivity of all races, and that’s why Big M Racing Secretary Scott Warren also carded a race where five drivers from the GSY Amateur Driving Club took on five African-Americans.

“It’s cool they mixed us in with the other guys,” said Tharps. “Maybe next year they should have a race and call it the “I Have A Dream” for a guy who did so much for our country and for people of my race.”

Mark Silva, representing the GSY, guided Cecil Casanova to victory in the GSY/MLK Remembrance Race as the 4-5 favorite in race two. Solomon worked out a pocket trip with Kingofthejungle but could not beat the eventual winner, coming up 1¾ lengths short.

A LITTLE MORE: Joe Bongiorno had the hottest hands of the drivers on the card, recording five winners, which included four of the last six races. … Yannick Gingras had a driving triple, giving him 11 victories over the last three programs. … All-source wagering totaled $2,403,831. … Racing resumes Saturday at 6:20 p.m.