BIG M THE (EPI)CENTER OF ACTION THIS SATURDAY

By definition, an epicenter is something negative, but bettors can turn another Epicenter – a 3-year-old Thoroughbred – into a big-money positive should he win the biggest race of the year on the horse racing calendar, as the 148th running of The Kentucky Derby highlights a gigantic Saturday of wagering at The Meadowlands.

Epicenter, the Louisiana Derby winner who is trained by Steve Asmussen, is the morning-line 7-2 second choice in the “Run for the Roses” in the normally bulky 20-horse field.

The Chad Brown-trained Zandon – the Blue Grass winner – is the 3-1 favorite from post 10.

Long-time Meadowlands regulars know the best way to watch and wager on The Derby is inside The Big M in one of the country’s most expansive simulcast venues.

Doors at The Meadowlands open at 9 a.m., with the first race at Churchill heading to the gate at 10:30 a.m.

There are numerous dining options for Derby Day at The Big M. For complete information, go to https://playmeadowlands.com/event/2022-kentucky-derby-simulcast-day/

Of course, in addition to the best in simulcasting, The Meadowlands will – as always – offer the best live harness racing in the world.

It begins when the live “Racing from the Meadowlands” pregame show, which will have the broadcast team of Dave Brower and Dave Little in their usual places on-set, kicks off at 5:47 p.m.

Once the pregame show concludes, they’ll be one live race conducted at The Big M, then the live action will take a break for The Derby, followed by races two through 13.

WALK UP AND WAGER: For added convenience, there will be a live betting window available for those to walk up and wager on The Derby in Lot M at The Meadowlands.

STARS WILL BE OUT: The Miss Versatility Series, an Open event for mare trotters, kicks off Friday (May 6), with some big names on the entry list.

Bella Bellini, the 2021 Hambletonian Oaks champion, returns to the races for her seasonal debut in the sixth race, while Atlanta, the 2018 Hambletonian winner who has a lifetime bankroll of over $3.1 million, headlines the 10th. 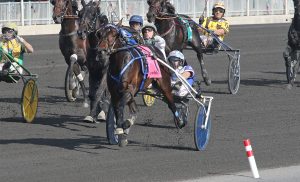 On Saturday (May 7), the Graduate Series for 4-year-olds begins, with Charlie May, off a sensational 1:48.3 score at The Meadowlands, the most notable of the pacers, and Ahundreddollarbill, an earner of $633,853 at 3 a year ago, headlining the trotters. 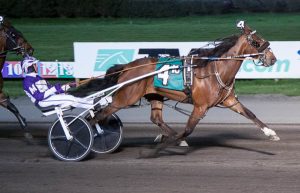 A PLETHORA OF POSSIBLE PLAYS: Simulcast harness and Thoroughbred racing all day long and live harness at night merely scratches the surface of what bettors can binge on Saturday at The Big M.

Not only does The Meadowlands offer the best in horse racing wagering, but sports betting as well, as inside The Big M is the top facility of its type in the world, The FanDuel Sportsbook.

The expansive betting menu includes the NBA playoffs, NHL playoffs and Major League Baseball. In addition, fight fans can watch and wager on UFC 274 in comfort.

For up-to-date lines on those events – and many, many others – go to https://www.fanduel.com/sportsbook-meadowlands

BIG M THE MOST COAST-TO-COAST: Last Saturday (April 30) marked the first of six live broadcasts that the New York Racing Association’s TV department teamed up with The Big M’s to show Thoroughbred racing to what is normally a Standardbred audience and vice-versa as Opening Night at Churchill Downs was paired up with The Meadowlands on what was a highly successful presentation.

“The Meadowlands was proud to show harness racing to a national television audience,” said Big M Chief Operating Officer and General Manager Jason Settlemoir. “And we look forward to continuing to do just that for another five shows.”

WHHC RESULTS: Todd Slembarski won the World Harness Handicapping Championship Qualifier at The Meadowlands Saturday (April 30) night, assuring him a seat in the WHHC Final on Sept. 10 at The Big M.

SURVIVE THE SUMMER: On Friday, May 6, The Meadowlands’ Summer Meet Survival Challenge, sponsored by 123Racing, begins with some great things on the table for bettors.

HORSE PLAY: Beginning on Friday (May 6), patrons attending the races at The Meadowlands can participate in “Horseplay” for a chance to win a 2022 Toyota Corolla.

Every live racing night through Friday, August 5, participants will attempt to throw their numbered horse into the window of a moving car. Of those that land inside the vehicle, one winner will be chosen at random and will receive a $100 betting voucher.

Each night’s winner will be entered into the grand prize drawing, which will take place on August 5. Guests can pick up a free horse to toss at the Horseplay Toyota at the Players Club Desk or the Horseplay table in front of the winner’s circle.

There is an added bonus for the kids who are at the track, as they will receive a free ice cream for helping pick up the horses left on the track.